The cooler weather provides the opportunity for men to adopt a slightly smarter look. The shirt / tie / suit look is OK for formal occasions but not always comfortable or appropriate.

A slightly more casual effect can be achieved, while still maintaining a smarter look by introducing a couple of soft, unstructured jackets to your wardrobe.

There are many on the market now, fine wool, linen, cotton or hemp. In order to get away from the ‘suit jacket’ look, choose softer colours, grey/blue, tabacco, olive green, taupe etc.

A fresh look for the new season – treat yourself.

No matter how much effort is put into the selection of an outfit to suit our figure type, no matter how well groomed we are, no matter how much money we spend on our appearance – it can all be destroyed instantly through poor posture. How many of us check ourselves in the mirror – standing tall, brilliant smile etc. then step through the door and instantly slouch? (Do you think those girls with huge muffin tops actually know they look like that?)

Sometimes a tendency to poor posture is inherited – look at your mother / grandmother. Poor posture can also be caused by lack of muscle tone due to insufficient exercise as we were growing. There can also be psychological causes – unhappy childhood (trying to make yourself invisible, small, not drawing attention to yourself) or as a response to breasts which become too big too quickly or are not dealt with adequately through a supportive bra as they grow.

Whatever the reason, some of us are left with rounded shoulders, a tendency to thrust our head forward and possibly a humpy back to some degree. Nothing is more ageing than this posture. 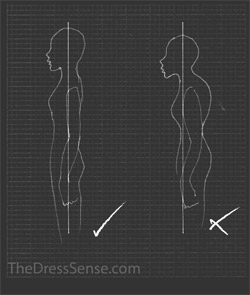 There are ways we can try to correct our posture:

There are some hairstyles which are best avoided and some points to remember when choosing clothes: 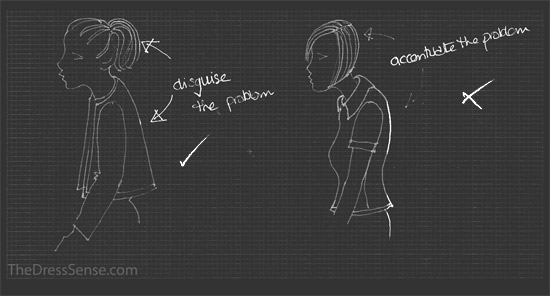 How to dress to cover for bad posture

By manipulating the silhouette and profile of your head can also help to disguise poor posture. We cannot change our skull shape literally, but it is possible to change the appearance by being creative with our hair.

Try to create volume at your crown and at the back of your head – through back brushing or experimenting with the numerous gadgets available to create buns, chignons and French Pleats. Even a simple healthy swinging ponytail helps! 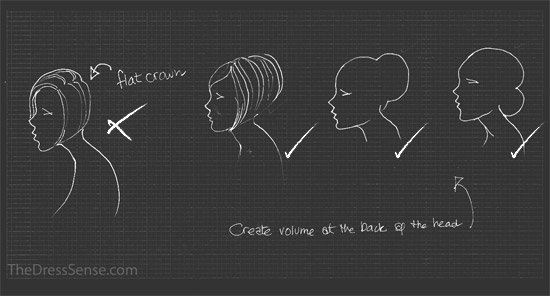 How to wear your hair to compensate for poor posture

You can liberate your look!

The classic man’s suit has something important in common with its casual equivalent – the Levi jeans and shirt / t-shirt combo. The reason they have been popular for so many decades is that they both camouflage any figure problems men may have*.

* Men don’t have the same issues as women of course, but nevertheless basic body proportions vary, length of torso vs length of legs etc., wide hips, skinny legs / arms (you can see how the twin outfits of men’s suits / classic jeans / shirt perfectly do the job of disguising any problems)

Men, wisely or instinctively have recognised for years that they look better in these classics. However, while still attractive and readily available staples, they can be a tad predictable and men might feel the need for a change now and again too!

The Recent Past – Teddy Boys and drainpipes, flares & flowers.

There have been some forays into various options over the years, sometimes interesting, sometimes disastrous.
There was the ‘Peacock Revolution’ in London in the 1960’s – brightly coloured suits with flared trousers replaced the traditional dark ones. Cravats and slim fitting floral shirts made an appearance, often worn with high waisted flared trousers or jeans and platform soled shoes which enhanced the tall lean look.

These were a welcome change after the post war uniformity of the 40’s & 50’s, which was broken only by the Teddy Boys with their Edwardian style frockcoats, drainpipe trousers and crêpe soled shoes (brothel creepers). The drainpipes regained their popularity when they were adopted by punk culture. But on the whole, very little improvement has been made on the classics in terms of enhancing the male image.

The Future – Men or insects?

There was a vibe at the end of the 90’s when it seemed there might be an exciting change of direction in men’s clothing. It felt as if there might be a shift towards shapes and fabrics inspired by the east. Softer, longer collarless shirts, layering, looser unstructured pants. But 9/11 quickly quashed that particular possibility and sent men’s fashion running for cover.
There has still been a leaning towards eastern influences, unfortunately , very half-hearted, with garments arriving in the shops completely out of context, with no supporting image to aspire to. An example of this is the dropped crotch jeans/trousers which look dreadful worn with traditional western shirts/t-shirts.
The super skinny jeans so popular now are another example of a garment which needs to worn with appropriate tops – not just slotted into an existing wardrobe. There have been some terrible sightings of short legged, wide hipped men wearing really tight figure hugging jeans with short tops, looking like some type of two legged insect.

While we wait for something new…

So if we are looking for a gentle change for you guys – let’s look at some basic guidelines:

For more updated style tips for men, see our TheDressSense pinterest board.

Dresssense is essentially a guide to dressing for the figure we have right now. Some aspects of our shape + proportion we can do nothing to change – but, looking around, how many of us would clearly benefit from losing a few kilos?

We have all tried various regimes and diets suggested by manufacturers and magazines – some with a little success sometimes.

The truth is – we can all lose weight if we really want to – without paying a cent. We have to fully accept the responsibility ourselves.

So here it is:

The Last Piece of the Puzzle

SO WHAT IS GOING WRONG?
WHY AREN’T WE LOSING THOSE EXTRA KILOS?

The answer is simple – we have developed bad habits which are sabotaging our efforts – EVERY DAY!

IT MAKES SENSE TO BECOME AWARE OF THESE SLY LITTLE HABITS –

If you have just one problem area, such as big hips, saddlebags or bust, it is a great technique to always use your dark tones on these areas and highlight your better features with lighter tones.

Those of us who are shorter, chunkier or have shorter legs than we would like would be well advised to avoid wearing strongly contrasting tones on our top and bottom halves. For example, don’t visually cut yourself in half by wearing a dark top and light trousers or light top and dark skirt. Any visual dissection like that will further reduce the length of your body (see illustration below).

By keeping your top and bottom halves tonally close you will give the illusion of a slimmer, taller you. This does not mean that both halves have to be the same colour – just tonally similar – as light or dark as each other. 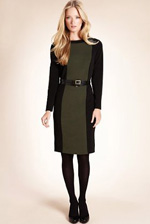 This season there are cleverly designed dresses available which do the work for us, making use of tonal contrast to flatter any figure. It is a simple trick, not new, but very effective. The idea is that the central panel of the garment is in one colour, or print, while the side panels, framing it, are in a darker tone. If the contrast is too great, for example black and white, this technique can look too obvious, but Mark & Spencers have produced some very successful examples this season.

Play around with these ideas to visually sculpt a new you without the gym. 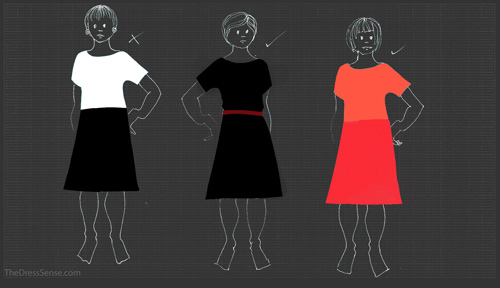 We all want to look our best, to find clothes which draw attention to our best features and away from our shortcomings. It is relatively easy with the short leg issue. The main thing to keep in mind is that it is best not to demonstrate too clearly where your legs meet your butt. Unfortunately sometimes that might mean avoiding some fashions which look great on the likes of Elle Macpherson! It does mean not allowing yourself to follow fashion blindly. It does not mean however, resorting to Kaftans.

But try these tricks: